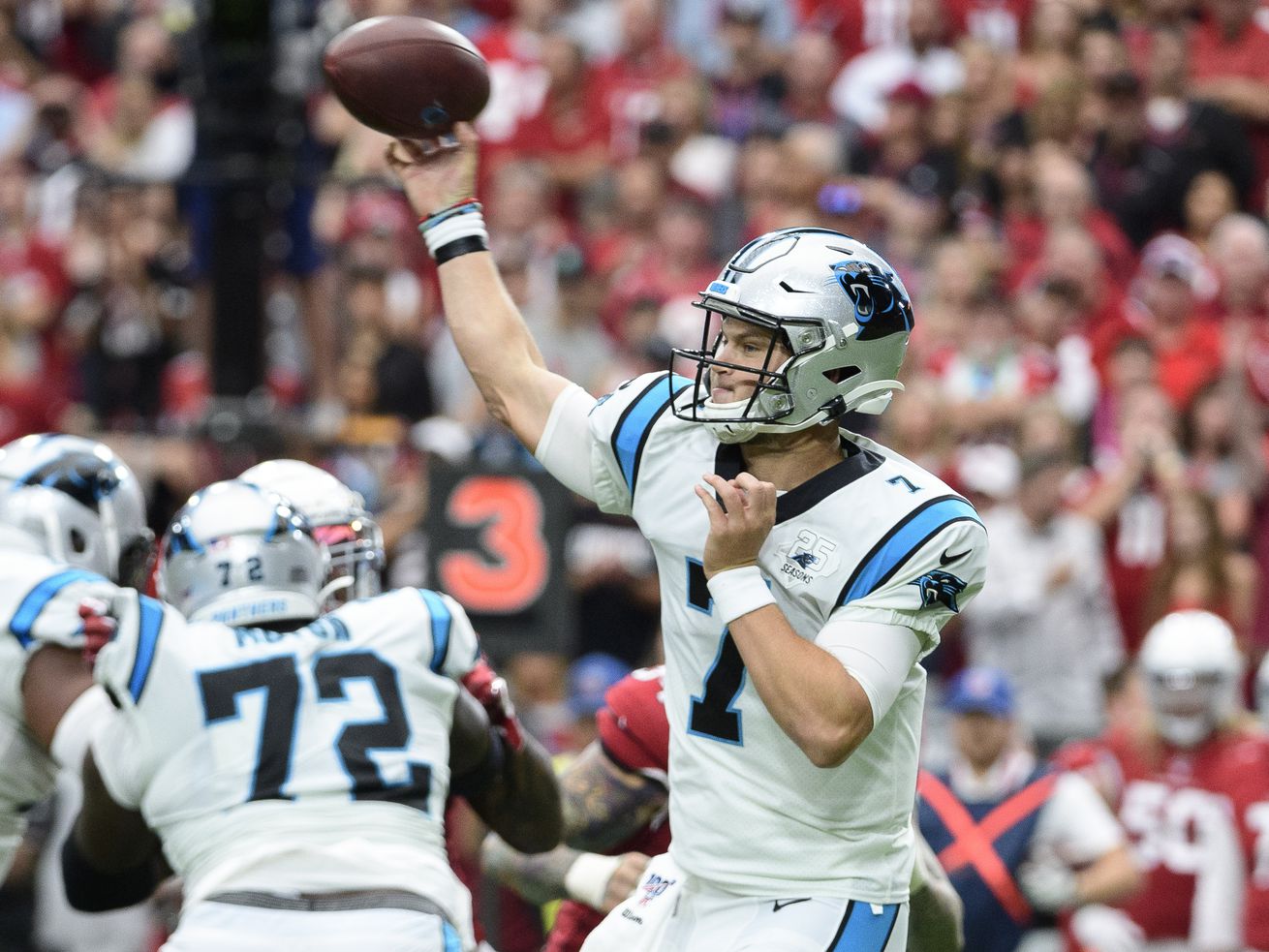 Best Lead Actor in a Limited Series? Kyle Allen. Best Costume Design? Like we could choose anyone else besides Gardner Minshew II.

TV actors and quarterbacks have a lot in common. They overcome startling odds to become professionals in their field, work tirelessly to star in just a dozen or two Sundays per year, and never know whether they will be around for another season, but they get paid quite handsomely when they stick around for a long time. (Also, many of the best ones got into the industry because their parents worked in the field too.) There are many actors and quarterbacks who might be great but don’t get the right opportunities to succeed, which is why Week 3 of the NFL season was special. A quarter of the league’s teams started a quarterback this week who entered the preseason as a backup, and seven of those games were on Sunday, which coincided with the 71st Emmys. So since award season is upon us, let’s hand out some golden clipboards for the best replacement quarterback performances of Week 3. As all award shows would be wise to do, we will avoid having a host.

Outstanding Supporting Actor in a Limited Series or Television Movie

Most of the script for the Jets’ Week 3 visit to Foxborough was predictable. In 2018 quarterback Luke Falk is drafted by the Tennessee Titans out of Washington State at no. 199 overall, the same spot as his idol, Tom Brady. But Falk is cut by the Titans and again by the Dolphins before he’s relegated into obscurity as the third-stringer for the New York Jets. But then the Jets starting quarterback gets mono, the backup gets hurt, and Falk has to make his first career appearance on Monday Night Football. They lose. Meanwhile, the guy who replaced Falk at college and was also a sixth-rounder, Gardner Minshew, becomes an internet sensation. Falk starts the following week against the Patriots and Brady.

This is standard made-for-TV movie stuff, but the final act was a curveball. The Jets were massive underdogs, but there was no comeback. Not only do they lose, like Rocky or Friday Night Lights, but it’s not even close. The Patriots won 30-14, with the Jets’ two touchdowns coming on a muffed punt and Pats backup Jarrett Stidham throwing a pick-six in garbage time. Falk had 12 completions on 22 attempts for 98 yards, no touchdowns, one pick, and five sacks. The team gained just 105 yards, the third fewest in Jets history. As ESPN’s Rich Cimini noted, Falk was 8-of-16 with a pick when the Patriots rushed four or fewer players, so they didn’t even need to blitz him.

“Offensively, we were atrocious,” head coach Adam Gase said. “As bad as you can get.”

Rather than give us suspense through the game, we get it through Falk plumbing the depths of his own humanity. New York has a bye and then plays the Eagles, Cowboys, and Patriots again, but there is (hopefully) nowhere to go but up.

Outstanding Lead Actor in a Limited Series or Movie

Allen’s time running the show in Carolina may not last long, but it was memorable. Playing opposite Kyler Murray, his former teammate at Texas A&M before both quarterbacks transferred, he outdueled the no. 1 pick with 19 completions on 26 attempts for 261 yards (10 yards per attempt, or a first down per throw) and four touchdowns with just one turnover. Allen’s 144.4 passer rating was the second-best mark for a Panthers quarterback in franchise history. Newton has not had four passing touchdowns in a game since 2017. Some devoted fans may clamor for Allen to get more screen time this season, though they are a loud minority. Newton is still expected to carry the franchise.

Voters love character-driven stories, and this Friday Night Lights spinoff set in Jacksonville, Florida, has been the most buzzed-about show of the fall because of its leading man, Gardner Minshew II. We’re only a few weeks into the show, and he’s already been a part of countless moments, from naked armband stretching to keeping Crown Royal in his sweatpants to trying to break his own hand with a hammer—and that’s just the prologue. This weekend Minshew once again showed us how much more depth there is to his character. He debunked a myth about his father and then went and won a game against the division rival Tennessee Titans on national TV. His acting on this play-action is second to none.

Most impressive about Minshew is that he wasn’t cast by the Jaguars to be an immediate contributor, but he’s jumped off the screen so much they’ve had no choice but to lean on him more as the season wears on. His throws along the sideline aren’t easy decisions, but a key lesson in acting and quarterbacking is to make the unsafe choice, and Minshew’s decisions pay off. He’s also been an excellent character foil to teammate Jalen Ramsey, who is reportedly seeking a trade. The one flaw with the show thus far is that it might have jumped the shark when Minshew attended the Washington State–UCLA game where his own school record for passing touchdowns was broken in a nine-touchdown performance.

Bridgewater has long been one of the most underappreciated talents in football, evidenced by the Saints shelling out to acquire him as their backup in 2018 and retaining him this year. On Sunday Bridgewater’s stat line in place of Brees looked solid but not spectacular, with 19 completions on 27 attempts for 177 yards (6.6 yards per attempt) and two touchdowns with no turnovers. But it was the Saints defense and special teams that truly carried this episode while Bridgewater filled in when needed. Punt returner Deonte Harris returned a punt 53 yards to give New Orleans a 7-0 lead before Bridgewater stepped onto the field. The Saints’ first three drives led to punts, but their defense added another score when Saints cornerback Eli Apple forced a fumble that safety Vonn Bell returned for a touchdown to give New Orleans a 13-7 lead. It was the first time the Saints defense and special teams scored a touchdown in the same game since 1998.

Running back Alvin Kamara also took a heavy load with 69 yards and a touchdown on the ground and another 92 receiving yards, much of which came after the catch, and a touchdown reception. Bridgewater was an essential glue guy who made everything else work, though nobody would confuse him with the people carrying their teams.

The most shocking plot twist of any team’s season was the retirement of Indianapolis’s Andrew Luck, but Jacoby Brissett has replaced him dutifully and faithfully, and on Sunday he had the best game of his career, as Indianapolis beat Atlanta 27-24. Brissett completed 28 of 37 passes for 310 yards (8.4 yards per attempt) with two touchdowns, no turnovers, and just one sack while leading the team to victory. He completed his first 16 passes, tying Peyton Manning for the fifth-best streak to open a game in franchise history. He sold fakes to get receivers open for touchdowns and also threaded passes into small windows for scores.

“Jacoby was unreal,” Colts coach Frank Reich told The Athletic after the win. “You can’t play quarterback much better than he did today.”

The Colts are 2-1, better than they started last year with Luck, and if they beat Oakland next week it’ll be the second time they’ve started 3-1 this decade.

Minshew looks like Rami Malek showed up to play Matt Saracen with leftover wardrobes from Bohemian Rhapsody. He’s lucky Cam Newton is not eligible for a golden clipboard.

Rudolph’s stat line in his first start filling in for Ben Roethlisberger looked underwhelming but not atrocious: 14 completions on 27 attempts, 174 yards (6.4 yards per attempt), two touchdowns, one pick, and two sacks. But his day was completely salvaged by two plays that obscured his true performance. On third-and-4, Rudolph hit JuJu Smith-Schuster for roughly 10 yards, after which Smith-Schuster outran three defenders for a 76-yard touchdown.

Rudolph to JuJu for a 76-Yard Touchdown! #Steelers pic.twitter.com/42uh0NEKO9

He also found rookie receiver Diontae Johnson on a 39-yard touchdown pass in the fourth quarter.

Those two passes went for 115 yards. On his other 25 passes, Rudolph has 12 completions for 59 yards and an interception, plus two sacks and a fumble. That difference is why his passer rating was 81.4, but ESPN’s Total QBR, a more advanced version of passer rating out of 100, gave Rudolph a grade of 7.7 (not a typo). That Rudolph was able to hide his numbers with those two big plays speaks to how much what we see at a glance can be altered in postproduction after the catch.

Jones originally auditioned for the role of Eli Manning, but Giants executives were so enamored of the young man that they rewrote their script to include him. Jones took over the starting role just three weeks into New York’s season after fans grew sick of watching Manning each week, and his first appearance was a tour de force. With many expecting him to fail, Jones completed 23 passes on 36 attempts for 336 yards and two touchdowns, plus ran in two more scores, including the game-winner.

THIS IS DANIEL JONES' TEAM pic.twitter.com/EIWwoN1qep

Jones is well cast as the lovable loser who wins. This might be the first of many wins for him in this category.

Five winners, five losers, and everything in between from the Cowboys win against the Miami Dolphins