Cowboys hot topic: The easy stretch is over, and it’s time to step it up 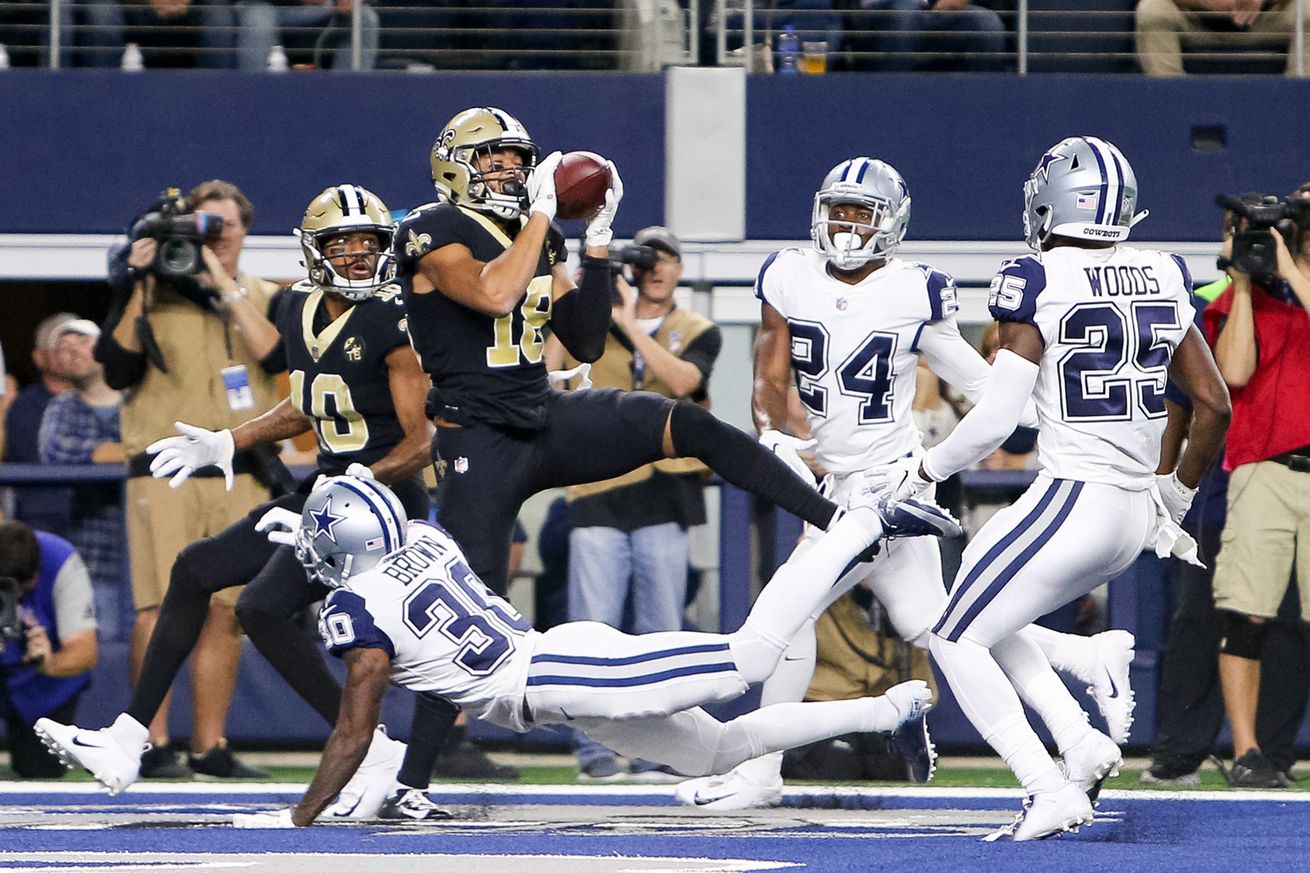 First up, the Saints. | Photo by Andrew Dieb/Icon Sportswire via Getty Images

Between now and the bye week, we should get a really good idea of just how solid this team is.

A lot of preseason predictions for the NFL flop every year. Some have already thudded into the dirt after only three weeks, like the idea that the Philadelphia Eagles were ready to take back the NFC East. (If that looks petty to you, you are to be congratulated on your perspicacity.) However, there are also some that look truly prescient. One of those involved the Dallas Cowboys. Looking at the schedule it was widely believed that the team could open the year 3-0 with a very winnable stretch of games against the New York Giants, Washington, and the Miami Dolphins. That was exactly what happened. The Cowboys not only came out on top as expected in each game, they have done so in pretty impressive fashion. But hand in hand with that was the analysis that things should get a lot harder in the ensuing four game stretch before their bye week.

Time to look forward at what Dallas faces in those games.

The Saints were another team that was touted as a favorite to win their division. Now, they have taken a major hit as Drew Brees has been injured and is not available when they host the Cowboys on SNF. They edged a pretty good Houston Texans squad before he was hurt, then got blown out by the Los Angeles Rams when he went out. However, they had one of the best backup QBs in the league waiting in Teddy Bridgewater. He won his first start with New Orleans against the hard-to-figure Seattle Seahawks.

They will provide a challenge to the Cowboys defense, as they have a lot of weapons working with Bridgewater, including Alvin Kamara and Michael Thomas. They scored 30 or more points in both their wins. One thing that needs to be working for Dallas is the pass rush, which finally showed some signs of life in the second half of the win over the Miami Dolphins. They must maintain pressure on Bridgewater and get some more sacks.

The matchup when the Cowboys are on offense should favor Dallas. The Saints have given up 27 or more points in all three of their games, and 301 yards passing on average. That would seem to play right into the hands of Kellen Moore, who has shown he knows how to coach the team to move the ball and score. However, this is best defense he has faced as well, despite it only ranking in the bottom quarter statistically. It seems the first three opponents for the Cowboys are currently the three worst defenses in the league in yielding points. Just going by those numbers, the Cowboys should be right on track to score at or near their current 32.3 points per game average. Stats don’t always tell the whole story, of course.

Despite that, the Cowboys should have a very good shot at winning, but the Saints are also likely the best offense they have faced, backup QB or not. If the Dallas defense holds down the opponent’s scoring the way they have done so far, especially before garbage time, things should go well. If not, well, we might find out how Moore does in a close game.

While there may be some questions about just how much more of a test the Saints will be, there is no doubt the game against the Packers and old nemesis Arron Rodgers (middle name Freakin’) is the most daunting one in this stretch. Like the Cowboys, they are 3-0. But they are doing it in an unfamiliar way, with a sometimes sputtering offense being carried by a fierce defense. The Pack has only averaged 19.3 points per game, putting them in the league’s bottom five. Old Freakin’ has a lot less support around him, which really makes you wonder why they let Randall Cobb leave. The former Packer has been an effective part of the Cowboys offense, and if not for some unfortunate penalties, would be flirting with 300 yards in total offense and a touchdown per game. We ain’t complaining, however.

But as much as their offense has bumbled, their defense has been outstanding, especially in protecting the end zone. They have yielded just 11.7 points per game, second only to the obscenely ridiculous 5.7 surrendered by the New England Patriots.

One of the most gratifying trends for Dallas so far has been that rather prolific scoring. They get points on five possessions a game like clockwork so far. If they can stay at or near that level, and the Rodgers black magic doesn’t rear its ugly head, they can win this. That is a big if, of course. The answer to that will have a lot of impact on just how good this Cowboys team truly is.

At first glance, the 0-3 Jets look like another likely win. But they have been struggling with quarterback issues themselves, and it is likely they will get Sam Darnold back from his bout with mononucleosis by the time Dallas heads back to the Big Apple’s outskirts. That makes the offense a bit of an unknown quantity. While they are next to last in scoring so far, we just don’t know how much of an impact Darnold will have on that. The fact he is so inexperienced doesn’t help project things, either.

Defensively they are a bit below the middle of the pack, but they held the Buffalo Bills, now a surprising 3-0 themselves, to 17. More noteworthy, they kept the undefeated Patriots to only 30, their lowest output of the year.

This could be another easy win, or a possible trap game. The first half against the Dolphins showed that the Cowboys can trip up a bit. Fortunately, that may have been a no-cost wake up call for Dallas.

We are all looking forward to this one, and the Cowboys get them at home, which is starting to become an actual advantage. The Eagles have been a bit of a mess, falling behind big against Washington in the season opener (trailing 17-0 and 20-7 in the second quarter) before Carson Wentz led them back for a six-point win. But things took a turn for the worse as they lost a very poorly played game on both sides to the Atlanta Falcons. Then they added a second poor showing in dropping their game on Sunday to the Detroit Lions 27-24. They were in both games right up to the end, but their own mistakes were too much to overcome.

The current talking point in Eagles media is that Wentz is being let down by his teammates. And if you watched those losses, you have to concede they may have a point. Nelson Agholor has become something of a meme for his dropped passes, and they were missing some other key weapons. They expect both Alshon Jeffery and Dallas Goedert back for this week’s game at the Packers. That is a Thursday night contest, so we will soon get an idea how they stack up against what may be their best opponent so far.

The Eagles are still doing a decent job scoring with 25.3 points per game, and they have left a lot of points on the field so far. If they can clean things up and get some help from the players returning, they are going to be another challenge for the Cowboys defense, which still has to get better in QB pressure and takeaways. Their defense has been bottom third in points allowed so far, so that may be in Dallas’ favor.

Never forget, this is a division game, and the Eagles are now the biggest rivals the Cowboys have in the division. Those often don’t go according to the way we think they should. This will be a real test for Dallas one way or another.

In light of the hot start for the Cowboys, particularly their offense, there are certainly no games in this stretch that look like certain losses, but all could be a stumbling block. If the Moore offense is indeed what we think it is, especially with the emergence of the running game over the past two weeks, they should be able to win most of these. 3-1 is a realistic hope, 4-0 not out of the question, and 2-2 seems a worst-case scenario.

Injuries and slumps still happen. The Cowboys have to avoid those and keep focused. If they do, they should go into their bye still in very good shape in the race for the division and the playoffs.